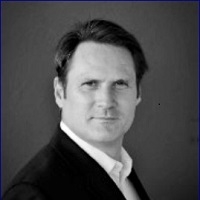 Pieter Geldenhuys is used extensively as a futurist, innovation expert and strategist on the global stage by some of the world’s top business schools (London Business School, Imperial College London, Cornell).  He assists numerous organisations in leveraging their innovative potential by providing them with the skills and insights to be proactive agents in creating the future.

He holds a degree in Electronic Engineering and has an MBA specializing in Technology Strategy. He is the Founder and Director of the Institute for Technology Strategy and Innovation (ITSI). Over the past two decades, he and his team have guided more than 4 000 students and more than 150 innovation projects within the largest technology companies in Europe, India, the Middle East and Africa.

He was the previous Vice-Chair of the Innovation Focus Group at the International Telecommunication Union in Geneva, Switzerland. He was also the Technology strategy advisor to the CEO of Vodacom and is also a nominated member of the South African Academy of Science and Arts. He was the previous Chairman of the ATKV and sits on several company boards.

As a public speaker, he has more than 2000 radio and more than 3000 public appearances under his belt and has spoken to audiences in more than 25 countries. He is the author of the book “Headlines from the Future”.

He believes the only way to effectively predict the future is to create it.